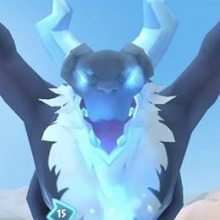 RatatoskTheSquirrel
July 2019 in Updates
Remember, this post is part of a series. Questions about dust and gems will be addressed in a future post!
CREATURE CONVERSION
We broke down the number of “steps” involved in maxing out a creature in the old system, and to the best of our ability, determined where that much effort (in time, in gem slots, in gold, etc) would put that creature in the new system.
But it wasn’t even that simple. With common creatures, which now have fewer gem slots, you may find that your creatures are now “maxed” where they weren’t before, and we want you to take the leftover effort and put it elsewhere. And a creature who was maxed out in a lower tier is not maxed out in a higher tier, even though you put in a lot of effort. Rare creatures have a new additional rank, now. Legendary creatures that were maxed out may not quite be maxed out in the new system.
We’ve addressed all of these discrepancies by trying to “make up the difference” with conversion currency.
CONVERSION TOKENS - CREATURE
Our goal here was to recognize the effort you invested into your existing creatures, to thank you for that, and to give you ways to redistribute some of your effort according to any new strategies you might want to try. We tried to make sure you would have options to customize your creatures after the update, and that you would feel like you came out ahead.
The specific number of creature conversion tokens is being calculated with a lot of different factors in mind. It’s impossible to lay out all the details, but broadly, the amount you get per creature will vary depending on how easy or hard the creature was to get, and how easy it will be to get going forward. Your total will depend on your creature’s ranks, abilities, and whether the creatures moved up or down a tier.
Using the creature tokens, you can go to the conversion shop and trade them for:
ABILITIES
Eagle eyed Solgardians spotted little dots over the abilities in a screenshot earlier this week. Here’s another screenshot, for reference:

What's a Night Witch? Guess you'll have to keep reading!
Those dots are part of the new ability system. Abilities are now divided into groups of levels called “elevations.” You can use your gold and dust to upgrade abilities within the whole base elevation, even if if your creature is only Rank 1 or Rank 2. You will have to increase a creature’s rank to unlock all the ability levels, similar to the original design. To access the next ability elevation, you will need to use runes. Here are two more screenshots that should make it more clear.

Runes! The elevation will be available, because the creature is high enough in rank.

This creature is only Rank 2, so the Elevation is locked until it gets advanced.
A RARE, LEGENDARY THANK YOU
Grimchop, Cracklehoof, and Nightcast are special cases. These three creatures are each dropping one rarity level, but they will not be converted as the other creatures will be. They will appear in their new rarity as the same rank that they were before the update, with one exception: If you have three gems slotted on Nightcast and Grimchop before the update, those two creatures might be one rank higher (they’re losing a gem slot). If they had one or two gems slotted before the update, they will still have them after the update.
Here’s the fun part: We are going to “mirror” those three creatures. Got a Nightcast? Wait until you see your new rare Night Witch. If you have a high level Grimchop, you will also get a free, high level legendary Grimwall. And if your Cracklehoof was literally a GOAT (“greatest of all time”), you have an even more magnificent Thunderhoof waiting for you in the legendary tier.
If you had old gems stockpiled for Grimchop, Nightcast, and Cracklehoof, they will be converted to new gems for the new versions of them AND duplicated as gems available for your new rare Witch/legendary Grimwall/Thunderhoof.
We hope all you veteran Solgardians enjoy your three new legendaries.
July 2019
0