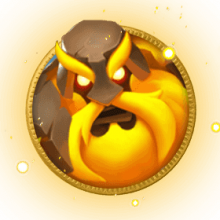 Are you listening closely, young Solgardian? Things are changing around here so you'll need to pay attention if you want to see the sun rise again tomorrow.

The Hero Arena has been renovated.

The Great Tree Yggdrasil has given all Solgard warriors a blessing and a challenge. In order to defeat the army of Mani and prevent Ragnarok, we must all train like never before.

So the you will now enter into Leagues rather than Ranks at the Hero Arena. And you cannot rest on your laurels whatsoever! If you want to sustain your standing and continue to receive extravagant treasure chests, you must continue to challenge and surpass your rivals.

The first thing you may notice when you enter the Hero Arena is Ranks and Standings are a thing of the past. You can now observe everything you need from the Leaderboards panel. It'll show your position, those who are at the top of the League, and which Buff's you are receiving thanks to your position.

Position Buffs are given daily and affect you across the whole game from time to time, which is not a bad thank you very much, if I do so say myself!

As a new player you start off unranked until you hit position 4,000, then there are 6 Leagues to climb. If you are updating then your old Rank position will be converted to the appropriate League. If you fall in the following ranks in your League the end of a Season you will be promoted:

Each time you move up a League you'll be awarded a Treasure Chest of splendid Loot!

Well it all sounds jolly good. However, in order to keep you on your toes, the Arena organisers have prepared some not so friendly rivals that will keep your duels to a reasoable length of time. Lower Leagues have less intellegant enemies to content with but once you hit the top Leagues, you'd better bring your elite strategy else get punted back to Apprentice!

Each Season finishes on a Tuesday at 10:00AM GMT! You'll want to make sure you are in a Top League to reap the great rewards. Dependant on your finishing position you will get a chest of loot and a Trophy that places you in the Hall of Fame! This will also decide whether you move up, stay in the same League or get relagated so it's worth making sure you do all you can not to slip down! Each Season you will start with a rating of 0 within your League - if you don't battle hard in the Arena you WILL get relagated... and then who can we rely on to defeat Mani?

I don't know about you but all the changes around here have my whiskers twitching eagerly in anticipation! I look forward to seeing you all in the Legend League, Solgardians. Now... where did that Elfling hide my parchment? It's enough to drive an old Yggdrasil squirrel nuts!

Until your next lesson at the School of Solgard... Good luck!